Jon is an accomplished horseman who enjoys long distance
riding and equine training. 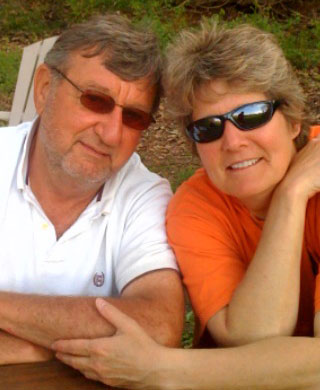 About Jon and Mary

Jon is a retried criminal justice program administrator with over 35 years of private and public sector experience. He specialized in developing forensic intervention/prevention programming for federal and state jurisdictions. He remains actively involved in social justice issues and provides consultation. Jon completed his BA at the University of North Florida, his MS from the University of Central Missouri and his MA from Lincoln University. He is an accomplished horseman who enjoys long distance riding and equine training. His hometown is St. Augustine, Florida.

Jon is actively involved in Missouri's Heritage Tourism initiative and is captivated by the natural beauty of this area. When not on the river or in the woods, you will most likely find him at the Bistro enjoying some wine.

Mary is a lifetime resident of Southeast Missouri and a lifelong steward of Missouri's woods and streams. After purchasing river front property on the Castor River she founded Castor River Ranch Stream Team 3506 in 2008 and as of 2011 participates in Missouri's Adopt-A-Highway program.

Mary graduated from Central High School and earned her B.S. in Physical Education K-12 plus a Masters of Administration from Southeast Missouri State University. Mary was a physical educator of 20 years and is currently a principle at North County High School. She is dedicated to promoting healthy, active lifestyles for both children and adults.

From I-55, exit at Jackson and take 34 West to Marble Hill. Approximately 8.5 miles east of Marble Hill turn Right (North) on State Hwy DD. Go 9.9 miles until you come to the Castor River Bridge - Turn Right at the guardrail. (If you crossed the bridge, you have gone too far).

Helpful Links For Your Visit

"Castor River Ranch Campground offers the best riverfront RV sites in the area. All of the sites are spacious and overlook the crystal clear Castor River. It is very peaceful and quiet with lots of wildlife." - Darlene Leonard, Sikeston, MO

"Castor River Ranch Campground offers a pristine, natural camping experience. The spring fed Castor River is one of the cleanest rivers in Missouri and offers some of the best small mouth bass fishing to be found anywhere." - David Minton, Fredericktown, MO

"Castor River Ranch Campground is a great place to unwind and escape the pressures of our hectic, demanding schedules. There is a soothing laid back quality to this river. If you want to get out of the "pressure cooker" for a while this is the place!" - Scott Bomar, Thebes, Illinois